Is Tempe, AZ a Good Place to Live? 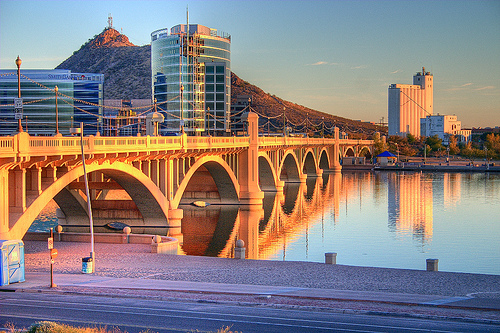 Arizona is a popular state to live in, and despite the well-known heat, many people are choosing to move to Arizona.

There are many cities in Arizona to choose from when moving to the state, and one of the most-well known cities is Tempe, AZ. However, this raises the question, is Tempe a good place to live?

Here is everything you need to know about living in Tempe, Arizona.

Tempe is growing more every year, and this isn’t a hard thing to see – even just by looking at the ever-changing skyline.

Tempe has new construction projects popping up all the time, gaining more and more places for jobs and business development.

Among these construction projects is the biggest venture, the Marina Heights office park, which is projected to be worth $600 million at completion. Marina Heights will be the home of State Farm’s western headquarters office.

There are also various high-tech companies moving offices to Tempe, meaning that there is a surge in high level – and top paying – jobs coming to the city.

All of these jobs coming to – or already in Tempe means a boost in the economy. This is a big asset for many working professionals who are looking to move to Arizona, and a big reason why Tempe made the Top 100 Best Places to Live list in 2019.

Tempe has been known to be a city with vibrant culture and artistic creatives in the past, and that is attractive for many people. This culture is expanding with creative tech companies moving to Tempe as well.

Shutterfly and GoDaddy have both opened tech centers in Tempe, and Google named Tempe as it’s eCity out of all of the places in the state of Arizona.

Tempe Marketplace is a huge shopping and social area in the city, with more than 100 restaurants and shopping stores there is always something to do in the bustling city.

Tempe has a very advanced and accessible transportation system. The city has light rail trains,  buses, and free Orbit shuttles that allow people to get from the suburbs to the city easily.

This is a big asset for people who choose to live outside of the city and prefer a quieter life in the suburbs, but travel to the city for work.

Tempe is also a very popular biking city, with one of the highest percentages of people who bike to work in the United States. The city has more than 175 miles of designated bike lanes and paths, making it very accessible and safe to bike everywhere.

Read: How Much Does a Home Inspection Cost in Phoenix, AZ

How Much Does A Home Inspection Cost In Phoenix, AZ?

What is a Pool and Spa Inspection? Scroll to top